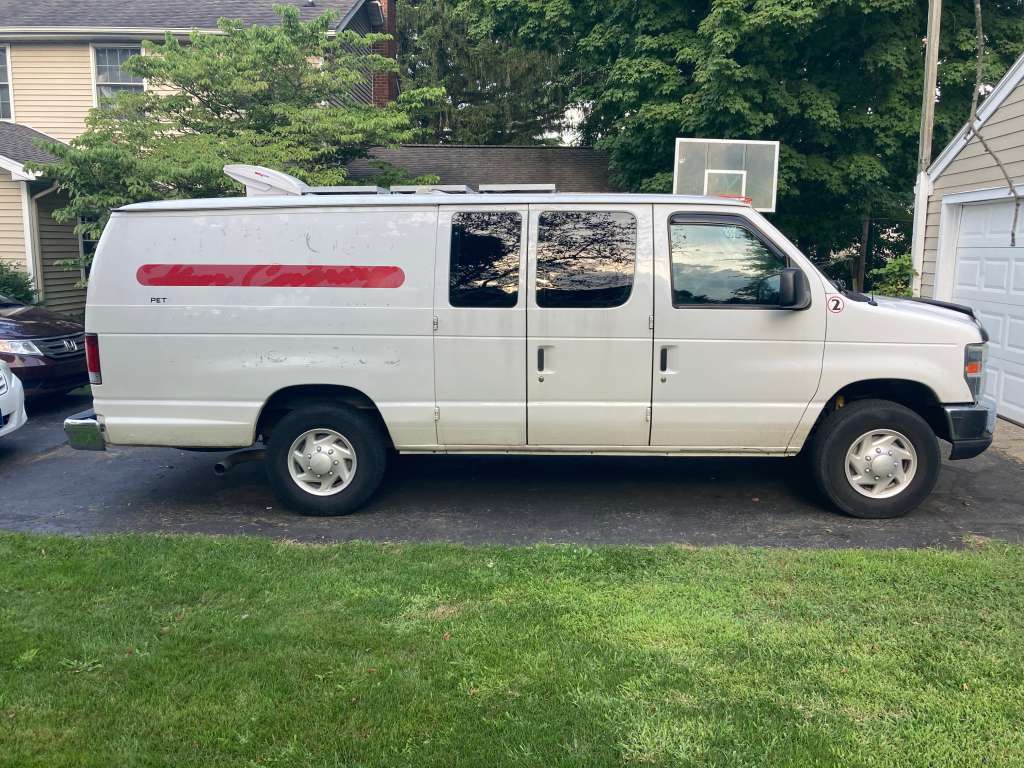 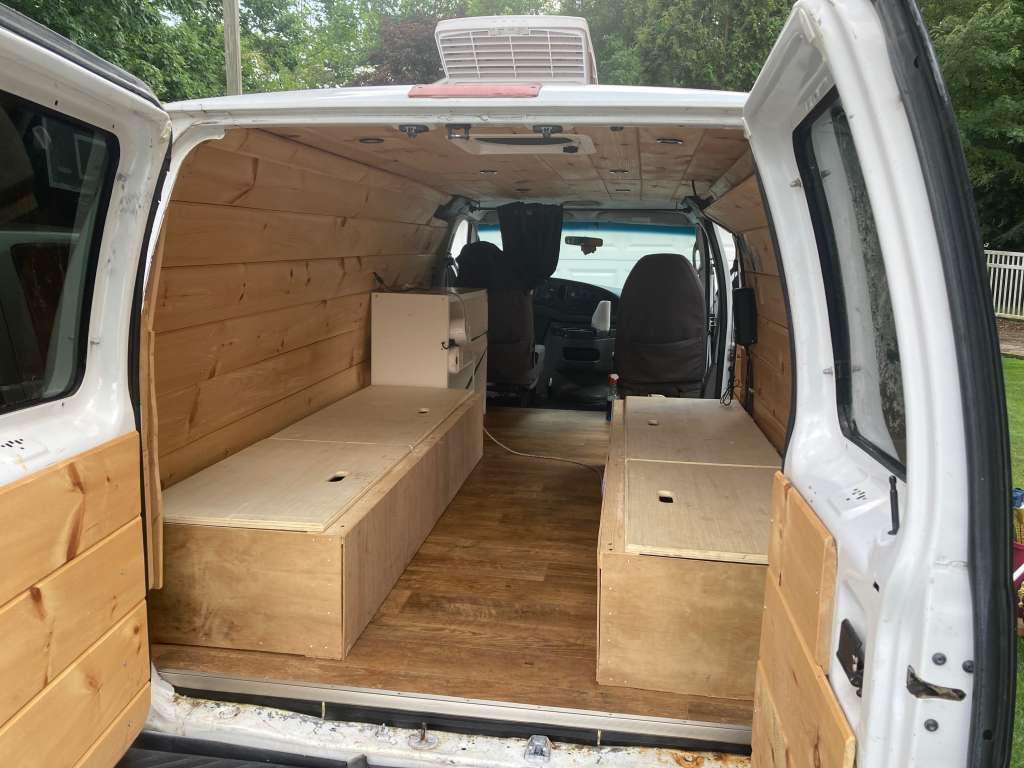 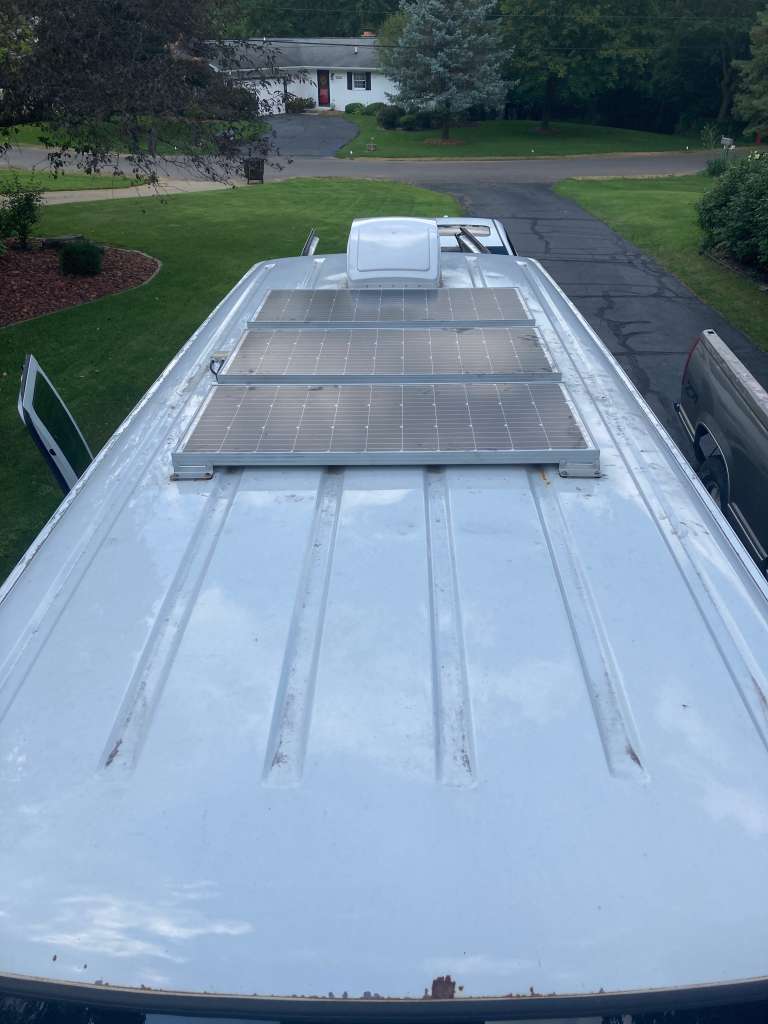 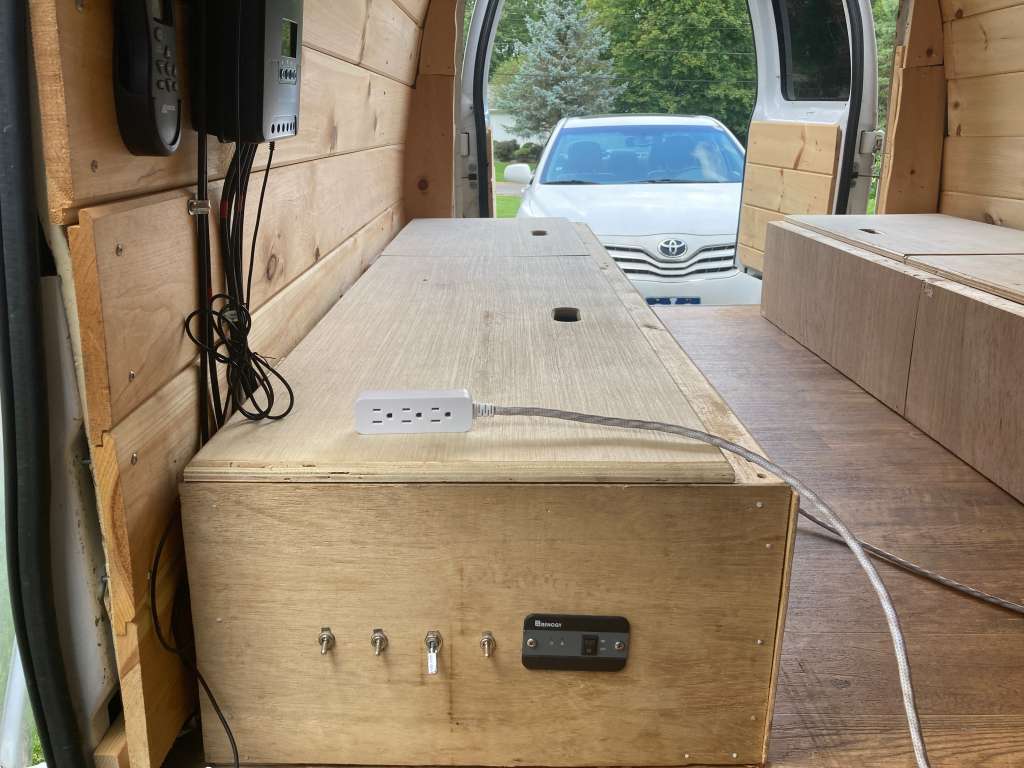 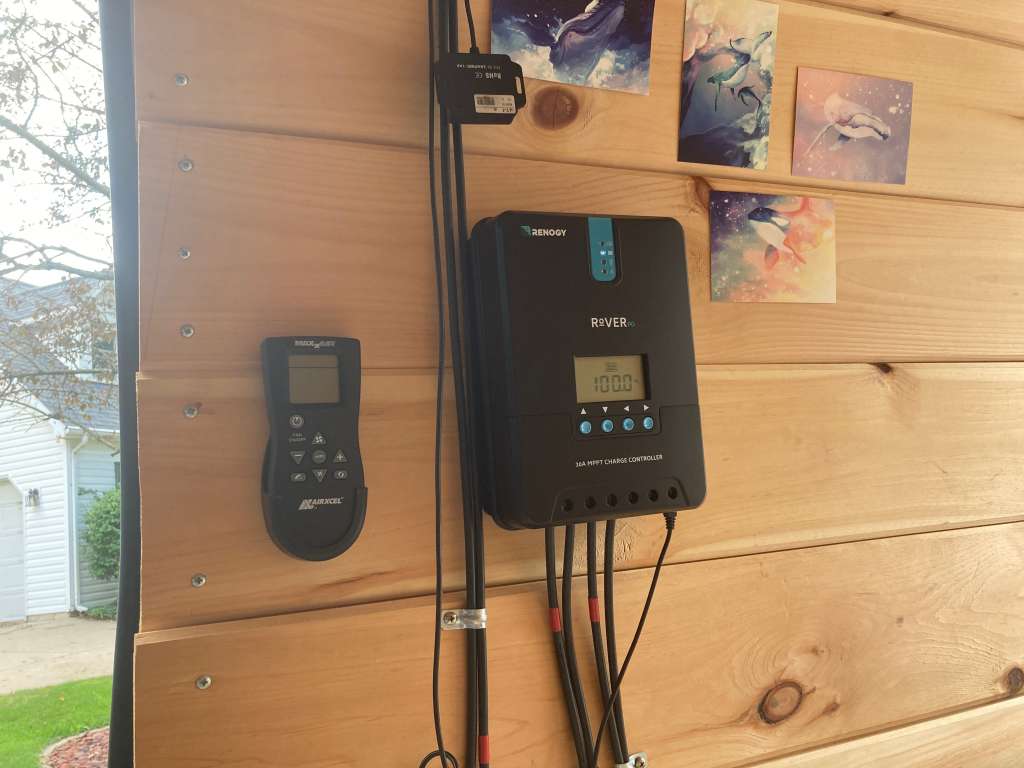 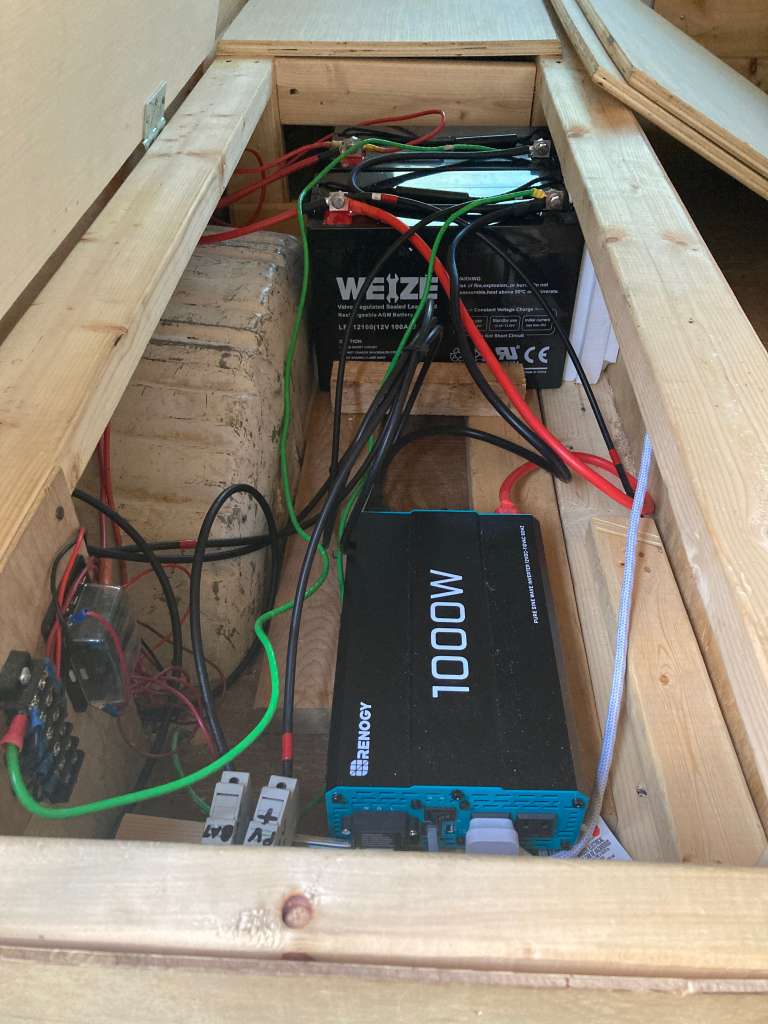 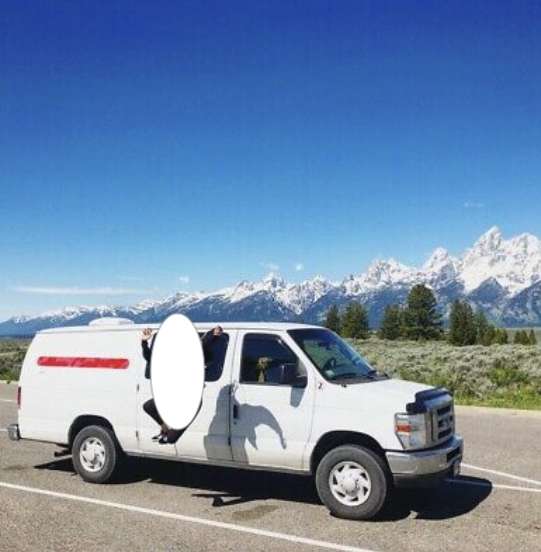 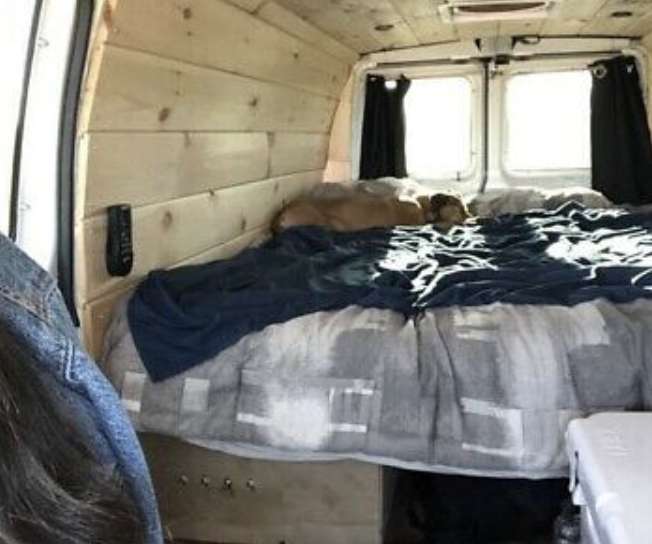 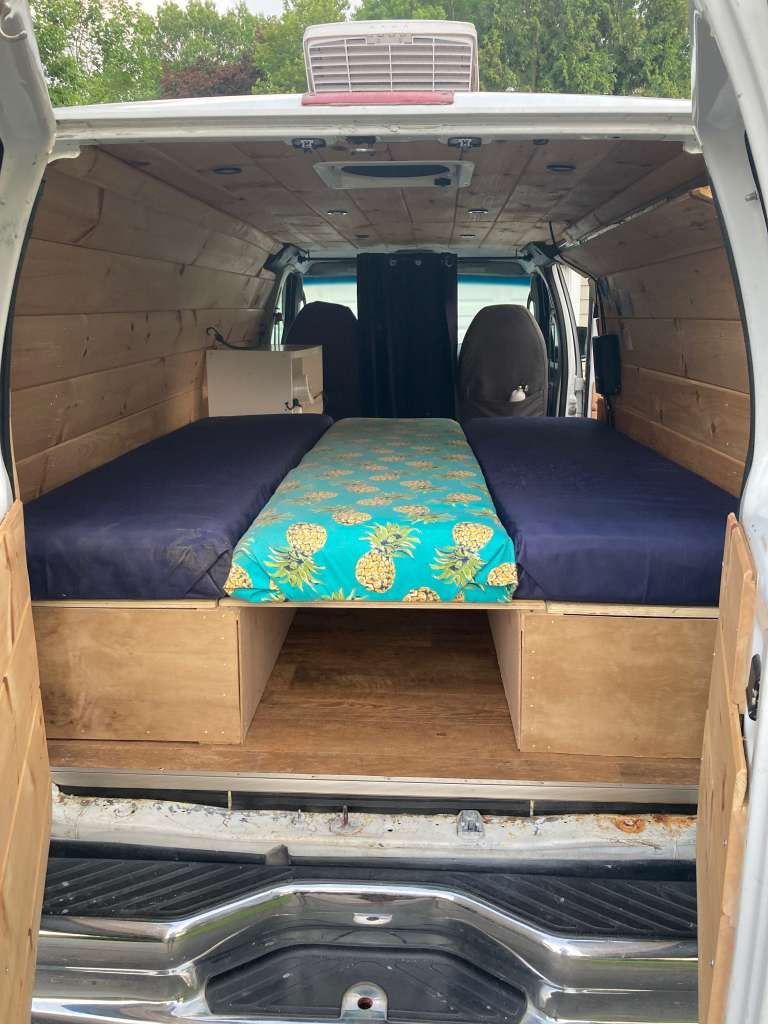 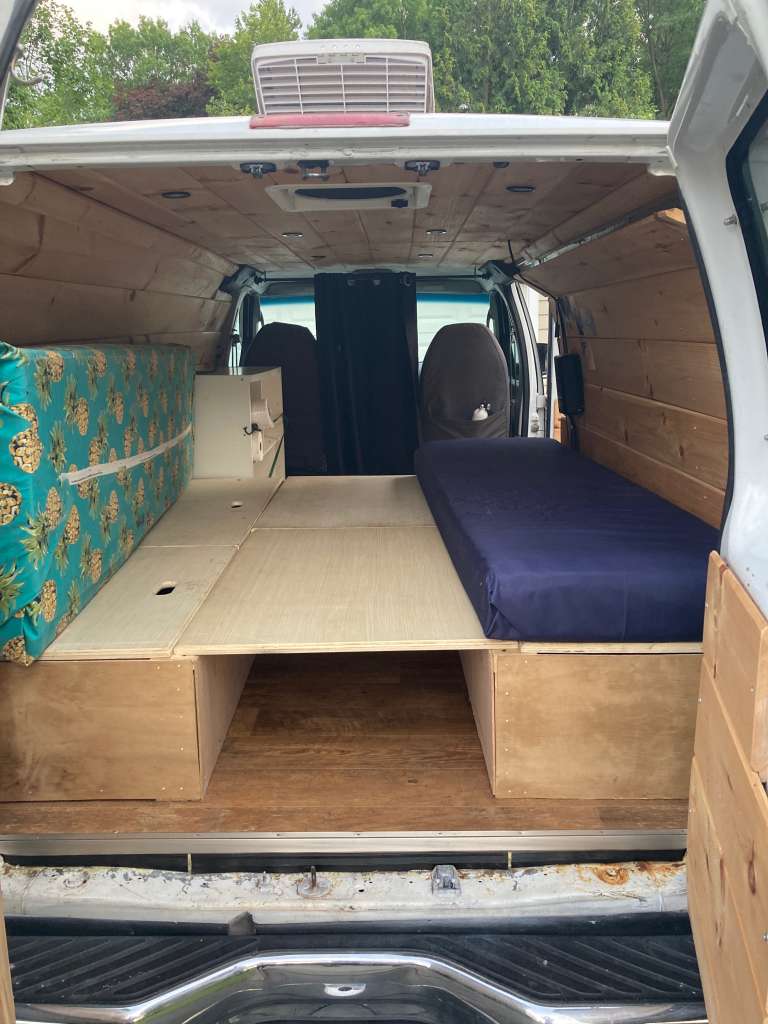 This van served me wonderfully this last year. I bought it last August to live in while I finished my third year of law school. I am originally from Michigan, but attended a school in Virginia. I spent the year living out of a Walmart parking lot, showering at a local YMCA, and studying for classes on campus. I have so many significant memories in this van and it is a shame to sell it, but I am moving to Kotzebue Alaska and will not be needing a vehicle (and it is far too cold with not nearly enough sun to live in a solar van). This van is great for taking long road trips, vacations, or living in. While I chose to live in it full time, the previous owners used it for summer vacations. If you are looking to save money or simply have a good time, you should seriously consider this van.

I only put 20,000 miles on it during the year. The only long trips I used it for were driving it from Massachusetts (where I purchased it) to Michigan and then back and forth from Michigan to Virginia twice.

I apologize that this post is not as detailed as it needs to be, I am getting the posting up tonight and will add more about the details when I have more time this week. Below are the basics. Also two of the pictures were taken by the previous owner, I use them just to show the comparison from when I bought it to what it looks like now, including solar power and other adaptions I made.

Solar/Electric: I installed solar power on the van and it ran a refrigerator and charged my phone and laptop, and ran a fan through the night without any issues.

I installed three, one hundred watt Renogy solar panels with a 30 MPPT controller. They are hooked to 2 lead acid AGM 100 amp hour car batteries. If needed the van can easily support a fourth panel without having to reconfigure the batteries or control panel. They are also hooked to a converter which leads to two, three-pronged outlets. I will post more details in the next few days.

The batteries also charge off the motor when it is running. Simply driving will quickly give the batteries a full charge. For whatever reason this set up causes the battery light on the dashboard stay on, but the battery works perfectly.

Refrigerator: I used a medium-sized mini-fridge which worked great. It's not included in the pictures as I took it out to clean. But it comes with the van and fits perfectly (almost perfectly--I had to remove the arm rests to get it to fit) between the passenger and driver seat.

Fan: The previous owner installed a high-powered fan. It has a remote control but can also be controlled manually. It has an "air in" and "air out" function and provides great circulation, especially if the windows are slightly cracked.

Lighting: There are two sets of lights on the inside that can be turned on and off with switches. When I put in the solar panels I accidentally drilled through the wires on one and it does not work, but it is an easy fix and I will make sure it works again before it is sold. There is also an LED light located on the outside of the van that provides enough light to sit around at night and play games under.

Bedding/Storage: Don't sleep on how important bedding is when living or vacationing in a van. One unique aspect of this van is that it is a custom, removable bed.  It consists of three individual pieces, is very comfortable, and is slightly bigger than a king-size bed. I am 6'2 and have tons of room to spare. The owners before me traveled in it together with their dog for the summer without issue.

The bedding is in three panels, which can be removed to access 3 large storage bins. The Fourth bin is where the battery is stored. The bins also double as a benches. When the bedding is removed 4-6 people can comfortably sit facing eachother. This can be great for eating inside on a rainy day or to play board/card games.  As I was living in the van, I used the space as extra storage which was very convenient.

It also has shelves as pictured, but they also have six square bins that come with it that fit into the slots. They are bungee corded in and do not move while driving.

Further information: It was in great shape mechanically when I got and had just had brand new tires put on. I will take it to the mechanic later this week to make sure it is still running perfectly.

The van is easily livable, but after living in it for a year there were a lot of little things I wanted to do that I just didn't have time to get to. So I plan on making a number of modifications before I sell it. I will make better retractible window coverings and window netting (so you can crack the windows at night and still keep bugs out). And I also play to reupholster the bedding.

I never had any issues with parking/eating/showering living in the van. I just got a membership at a YMCA and started everyday by driving over and showering before class.

I also cooked about 90% of my meals. I used a portable propane gas stove every morning to cook up lunch and dinner which I stored in my fridge. If I had a busy week I would cook up 6-8 meals and store them for the week. Also, if I wanted to get out of bed to a warm van in the dead of winter, I would just turn on the stove, and with the space being so compact, the van would only take five minutes to warm up.

Being able to find parking was my greatest fear going into the year and it turned out to be a complete non-issue. Generally, I would just sleep in a Walmart parking lot. The particular one I frequented had about 5-6 of us regulars sleeping there nightly. A few of my "neighbors" I actually became friends with. If I was too tired or too far away, I would just pull into a subdivision and sleep parked next on the curb or sleep in a hotel parking lot.

I am willing to negotiate on price. I would really love to find someone who plans to use it frequently and take good care of it.

I just took the BAR and have some free time before my next job starts, and I would love to be able to take one more trip in it. If you decide to purchase it within the next few weeks I would be happy to deliver it.

You can reach me anytime on my personal cell at 1 (517) 962 9279. If I do not pick up I will call you back, most likely within the hour. You can email me at samukan@mail.regent.edu but it may take me a day or two to respond. 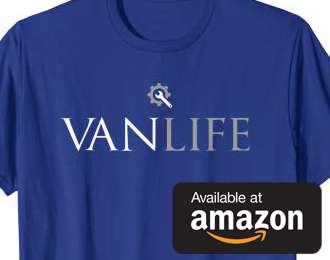